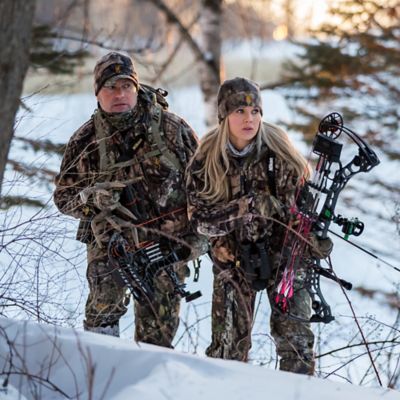 Both Pat and Nicole got their start in hunting at a very early age and were taught how to hunt from whom they looked up to the most, their fathers. Nicole shot her first deer at the age of six and since then has put many record book animals on the ground and all of them being on film. Her personal best is 195” whitetail from her home state of Illinois and her highlight to her career came when she spot and stalked a Brown Bear with her bow at 10 steps. Pat has been hunting for more than 45 years and has an unmatched track record of taking some of the largest whitetails in the world. Pat has anchored over seventy-five record book bucks all on camera and currently holds the record for harvesting the largest typical ever on video. Pat and Nicole have 5 children (Ranging in age from 23 to 4!) that all have the same passion for the outdoors. Of all the places they've been blessed to travel too, they both admit there's nothing like being on their home turf in the state of Minnesota hunting with their children. They've made it their priority to introduce the outdoors to as many youngsters as possible to ensure our hunting heritage continues for many generations to come.