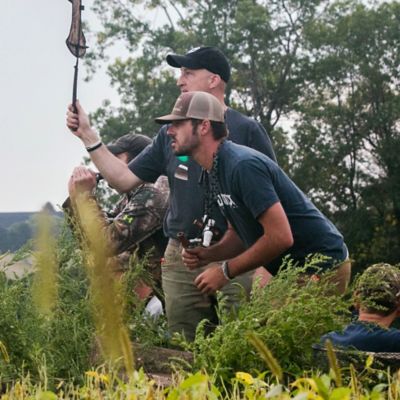 Logan is a fifth generation waterfowl hunter with roots originating from northeast Missouri. He was extremely fortunate to have been raised with numerous highly qualified outdoorsmen front-and-center in his life. Safety and animal conservation were strongly taught and enforced, mostly by example. Logan shot his first pheasant at the early age of seven with a 410 shotgun. He quickly became a fan of all bird hunting and saw his love of the sport intensify while playing college baseball at Fort Hays State University in Hays, Kansas.

As 2nd Grader, Ronnie was introduced to Upland Bird and Deer hunting by his Grandfather, David Curtis Carter. Ronnie learned about the outdoors from that man who made a name for himself as a Multi-year Bird Dog Trial Champion in South Carolina and Owner of Carter’s Shooting Preserve. Several years later, Ronnie’s passion for chasing Ringnecks and Bobwhites shifted to Greenheads after his first afternoon in a pit blind outside of Mound City, MO. After 22 years in country radio working as a on-air personality, Ronnie decided to parlay that experience into his passion for the outdoors with the creation of Heartland Waterfowl.